As surveyors we often see deep pitting up to 3mm in narrow boat plating. Normally caused by galvanic corrosion it can be prevented by installing a galvanic isolator and if you’re a live aboard with access to shore power an isolation transformer.

BMS has a corrosion detection meter which can identify any potential ground leaks and prevent galvanic corrosion and pitting which can lead to expensive repairs. Contact us for further information and cost. 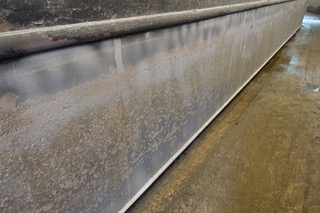 Corrosion of metals is greatly promoted by the influence of an electrical current. Anodes are commonly used to help protect the hull in the case of galvanic corrosion caused by electrical current flowing between connections and between dissimilar metals.

Stray current corrosion is different in that it is caused by electricity from an outside source flowing into the boats metal components and out through the water for a ground.

Commonly caused by problems in the DC circuit, the solution is to have the DC system installed correctly in the first place!

Anodes will offer protection based on the Noble Series of metals. The theory is that by attaching a piece of metal to the hull that is more reactive than the hull itself then this piece of metal will corrode first. For our inland waters we use sacrificial magnesium anodes for protection. As a note of general interest, aluminium is used in brackish water and zinc in seawater.
In order to understand what an anode is and why we need them we firstly have to consider how a battery works.

Two plates or rods of different metals are placed in a conducting liquid. The rods are known as electrodes and the liquid is known as the electrolyte. If the two rods of dissimilar metal are in direct electrical contact a simple battery is formed and a small DC voltage drives a current from one electrode to the other via the electrolyte.

This process of generating voltage which drives the current (amps), results in electrons being lost from the metal atoms in one of the electrodes. This loss of electrons produces electrically charged particles called ions which dissolve into the electrolyte. Very simply, they travel from one rod to the other through the liquid. The top & bottom of it is that one of the rods or plates looses material in the form of ions, known as the anode, the other rod gains material, known as the cathode, and which metal looses the material depends upon how noble it is.

The most noble metals are the ones that are the most resistant to corrosion with, for simplicity, the highest one being gold. Starting with gold, metals can be arranged into a Galvanic Series with gold at the top being the least reactive and magnesium at the bottom being the most reactive. The corrosion between metals in the galvanic series is known as galvanic corrosion.

So, back to our boats and their metal hulls.  A typical mild steel hulled canal boat will have a bronze (alloy) propeller, a stainless-steel propeller shaft and a brass stern gland. All the metals in the system are in some form of direct contact with each other. In the galvanic series, mild steel is more active than the other metals so when they are all immersed in fresh water (a weak electrolyte) it will become the anode and start to loose metal and corrode.

Introduce magnesium, or magnesium alloy into the system and this will corrode before the mild steel, hence the use of weld-on magnesium anodes on hulls in fresh water.

Sea water or brackish estuary water are stronger electrolytes so anodes of zinc and aluminium respectively are used as magnesium, being the most reactive, would corrode too quickly to be cost effective.